Wib, the fast-growth cybersecurity startup pioneering a new era in API security, today announced a $16 million investment led by Koch Disruptive Technologies (KDT), the growth and venture arm of Koch Industries, Inc, with participation from Kmehin Ventures, Venture Israel, Techstars and existing investors. The investment will be used to enhance Wib’s pioneering holistic API security platform and accelerate international growth as it expands operations across the Americas, UK and EMEA.

API security is one of the biggest challenges facing CIOs today. Traditional API security solutions are siloed and fragmented, leaving CIOs with a choice of multiple point products or bolt-on integrations to create a patchworked solution. This results in increased cost and complexity, reduced visibility and control, and greater exposure to risk.

Wib’s holistic API security platform is the only solution to provide complete visibility across the entire API landscape, from code to production, helping unify software developers, cyber defenders, and CIOs around a single holistic view of their complete API domain. By delivering rigorous real-time inspection, management, and control at every stage of the API lifecycle, Wib can automate inventory and API change management; identify rogue, zombie and shadow APIs and analyse business risk and impact, helping organisations to reduce and harden their API attack surface.

“APIs have become the Achilles heel of cyber defenses and the number one threat vector for cyber-attacks,” stated Gil Don, CEO and Co-Founder of Wib. “APIs account for 91% of today’s internet traffic with over 50% being invisible to business IT and security teams. These unknown, unmanaged, and unsecured APIs are creating massive blind spots for CIOs that expose critical business logic vulnerabilities and increase risk.

“What’s more, traditional and legacy web security approaches, like WAFs and API Gateways, were never designed to protect against modern logic-based vulnerabilities. The Wib platform has been purposely built for an API driven world creating a new category of API native security.”

A recent report by industry research firm GigaOm, placed Wib as a “fast mover” in the “leaders” category, stating, “Wib is a new company but brings a strong enough offering to jump straight into the leaders category” and “Wib is a new entrant in this space, but it offers a comprehensive solution.” Wib was also called out for its capability in “source code analysis with an eye toward API weaknesses is Wib’s greatest strength.” The report ranks Wib’s API Runtime Protection, Monitoring and Reporting as exceptional in its focus and execution. This is a real testament to the Wib’s innovative API security platform and approach. 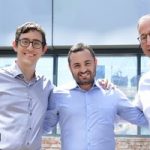